“If there is anything worthy of praise, think about these things.” Philippians 4:8b

“Let the wise listen and add to their learning …” Proverbs 1:5

“Everything is possible for one who believes.” Mark 9:23

We are very proud of the work we have been doing since 1999 to promote the understanding and tolerance of other cultures and to celebrate our similarities and differences.  We believe this is vital to prepare children for a multi-cultural world as well as engaging them in exciting learning.

We were the first school in Oxfordshire to video conference with a school from abroad (Sweden) and have acted in an advisory role to schools wishing to set up successful partnerships.

We have been successful in achieving the full International Award for the third time. This is to show what a huge range of opportunities we provide for our children. Activities such as our whole school International Week, Year 2’s African Drumming, FSU’s Thanksgiving Celebration and Year 6’s Swedish exchange all count towards achieving the award. The assessor’s comments at the initial stage of the application were: “Hook Norton Church of England School is committed to enriching the school curriculum by including global learning and citizenship. The established partner school in Sweden provides a platform for both language learning and collaborative work on issues such as Fair Trade and Recycling and Re using. The staff of your school have taken advantage of the CPD opportunities available such as ERASMUS+. I particularly like the way the activity ‘Thanksgiving’ looks at food and then making the pupils mindful of the Food Bank and why we have a need for them. The visitors to the school from different backgrounds and countries enriches the experiences of the pupils.” 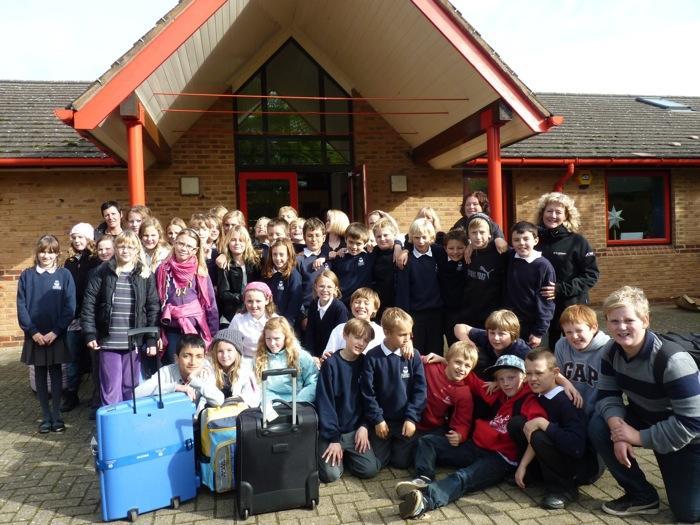 In 1999, Cherwell Council supported a link with schools in Vara, Sweden. 18 years on, we are proud to say that we are still maintaining our link with Vastra Parkskolan! We have engaged in three Commenius projects with the school alongside other partners, and have recently entered an ERASMUS+ project with the school (see below). As part of our link, each class writes to their corresponding class in Vastra Parkskolan. Year 5 and 6 children write to their pen pals and the Year 6s also video-conference their friends. This year 12 children are visiting the school and staying with host families in Vara. We are hoping to host the Swedish children in the Summer Term. We also celebrate the St Lucia festival together using video link and the Swedish children enjoy our children perform songs from their Christmas performance each year. Friendships formed during school exchange visits many years ago are still going strong today with families taking holidays in Vara and vice versa! We are incredibly proud of our link with Vastra Parkskolan.

In spring 2013 we established a link with The Dominion School in Nairobi, Kenya. We are enjoying learning about education and life in Nairobi through the eyes of the children. The primary link will be with Y2 who will have the opportunity to write letters and prayers to their friends in Nairobi.

In September 2016 we established a new link with a school near Paris called École Louis Pasteur. The children wrote to pen pals entirely in French with support from Mrs Nixon for a whole year! We are now communicating with the school through class letters and sending examples of work to each other. This link gives the children a real purpose for language learning and allows the children to have experience of communicating with someone in a foreign language.

As previously mentioned, we have entered a new ERASMUS+ project with our partner school Vastra Parkskolan in Sweden. Our project is called Cre8 and focuses on developing basic skills in numeracy and literacy through entrepreneurial projects. As well as having a heavy focus on developing children’s maths and literacy skills, these projects will have a focus on sustainability issues such as the use of Fair Trade produce and re-purposing and recycling items that would otherwise have been put into landfill. As part of the project, teachers will be planning and carrying out projects together with their Swedish counterparts and delivering the lessons back in their own classrooms. The children will then have the opportunity to communicate with each other about their project work. Some of the Year 6s are fortunate enough to have the opportunity to go to Sweden in March 2017 to begin work on our first project. We are also hoping to have the chance to host some of the Swedish children in the Summer Term to continue the work they have started together. There are many other exciting projects in the pipeline over the course of the two year project which will run until September 2018! This is a very exciting opportunity for everyone in our school community.

A project with Vastra Skolan, Sweden and Hvisto Botev, Bulgaria.

• Water in the Developing World

A pamphlet about the Water project was produced by Bulgaria and given to England and Sweden.

Photograph albums and small booklets were made up by England and Sweden after pupil visits. The albums were presented as mementos to the school visited.

Joint products in the form of “cooperation”, “awareness”, “understanding”, “information”, “joy”, “excitement”,  “life experiences”, “memories” have all resulted from the project.

The project was very important in each school and was a special feature of the schools which the staff and children were very proud of.  Inspectors praised the project when they came to the different schools and said that it helped to make each school unique and special.

Children felt that the partnership was an important part of their school and that it helped them to understand about different lifestyles and cultures.  For Sweden, Spain and Turkey it helped them in their learning of English.  For England, it helped children become more aware of different languages.

• Then we involved children of all ages in the project – from 3 to 13 in all the participating schools.  This began with exchange of letters, posters and cards, telling each other about the sort of favourite foods we like to eat, national dishes and celebration foods.  We also video conferenced where children talked to each other about food at school. 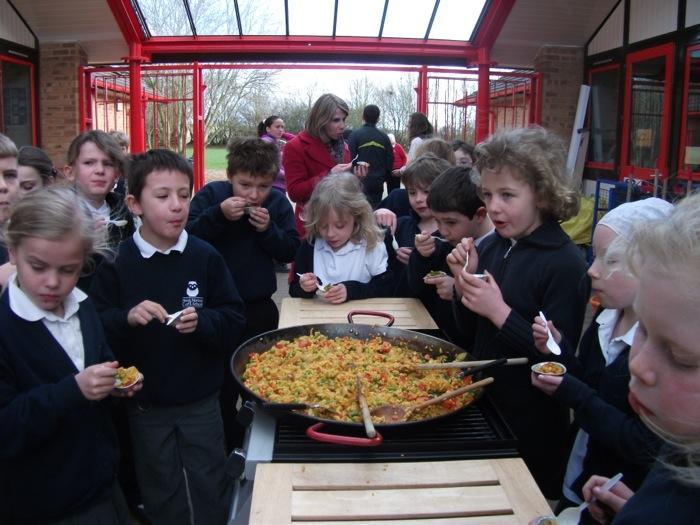 • This was followed with pupil exchanges where the children experienced school and life in the different countries. The children tried new dishes and school meals and enjoyed comparing similarities and differences in local food.  We discussed how the times of meals are very different between countries and discussed length of time for meals at lunchtime and whether food is provided for free (included in taxes).  A shared recipe book was compiled incorporating recipes from each country. Some children had never been out of their home country before, so it was a very exciting time for them.

• Some children stayed with host families in the partnership countries. They spent time in classes and visited local places of interest.  During their stay they also shared some of their own culture with the host school. For example, Spanish children cooked and served paella for the English children and in France the English and Spanish children made traditional Crepes and Galette (from the Recipe Book compiled).

• In the second year we focused on physical activities where the children exchanged letters about their favourite national sports.  Children wrote instructions for favourite children’s games.  Seasonal sports were compared, with more seen in countries like France and Sweden where they have snow.  Some games were very similar. Curriculum sports were compared, with some schools providing swimming lessons.

• The project culminated in an International Sports and Games Festival in Sweden where the countries participated in a day of sport from each of the countries held in the school.  Photographs and video clips of activities were shared with the partner countries involved in the project to share with the rest of the schools back home. 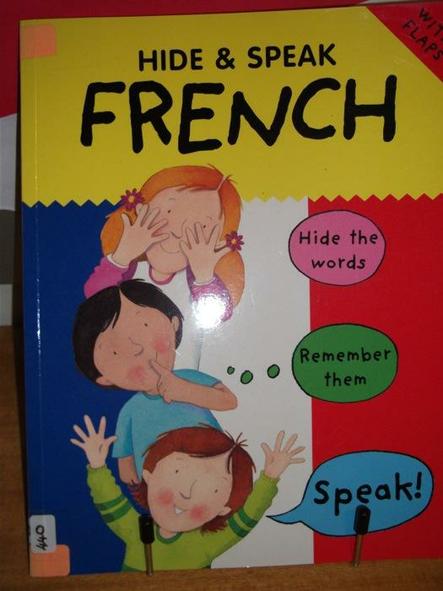 In 2009 we hosted a French language teacher for three weeks who worked mainly in Year 3, but taught across KS2.

• To develop valuable educational, social and cultural experiences for pupils through the learning of a foreign language.

• To develop communication and literacy skills to lay the foundation for future language learning.

• To raise awareness of a multi-lingual and multi-cultural world to give pupils an insight into their own culture and those of others.

• Using and responding to french, spoken by the trainee, listening carefully and using correct pronunciation and intonation, learning techniques for memorising words and phrases, working with authentic materials, considering their own culture and comparing it with france, considering the experiences of people in France.